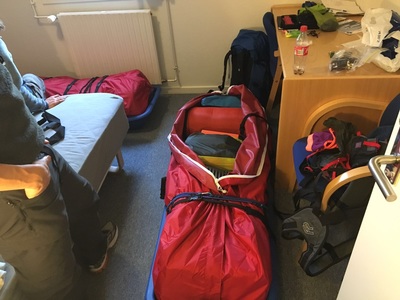 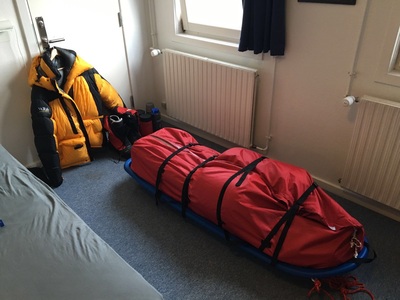 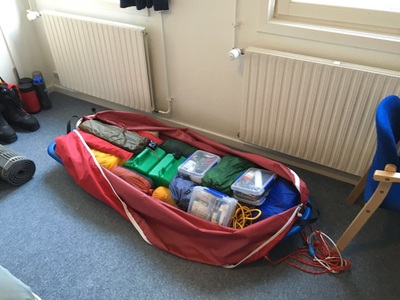 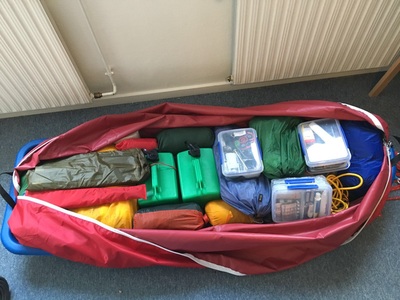 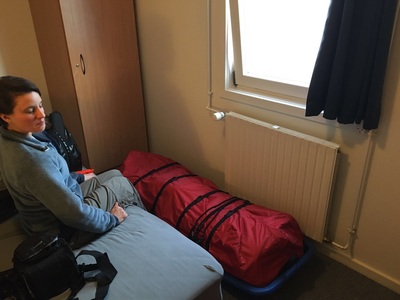 21 April 2016  All going well- moving well though the lumpy ice section. Looking forward to the sunny conditions on the weekend after a few days of snowy conditions. A small unintended trip into an ice river ended up with one wet boot - but otherwise all going well.

22 April 2016  Team are nearly out of the crevasse zone. This is well ahead of plan and is great going especially helped by improving conditions over the next few days. Should be on skis tomorrow.

23 April 2016  Onto the skis! And out onto the ice cap proper. A full 16.7km covered today which is a great day at this early stage with full sled's. Better yet - the next 5 days forecast for mostly sunny weather with a high pressure system sitting over west Greenland  for the next few days- mild temp's between -10c and 0c, low winds- should be a nice few days skiing.

24 April 2016  Good day of skiing - sunny warm weather (around zero celsius) allowed skiing in just thermal tops. 21.5km completed by the end of the day, skis waxed up and gliding well in warm conditions. With weather conditions to remain much the same over the next week - expecting to be an Dye 2 radar station by the end of the week.

25 April 2016 Another nice day skiing - 23km covered today in good conditions. Up for breakfast at 6.30am, on the skis by 8.30am - and set up for the night at 6.00pm. Tent doors open to the views given its too hot in the tent at the moment with the mild conditions. A little sastrugi making things interesting.

26 April 2016  Colder conditions today - 25km covered by 6pm - and rolling onto the radar station Dye 2- which should be reached within 3-4 days time. This US cold war radar station is largely still intact (uninhabited) - although slowly being consumed by snow. This large station marks 180km across the ice cap from the starting point - a few days short of half way to the finishing point. Total altitude gained so far is 1620m.

27 April 2016 Skiing into a strong headwind today - but managed 25km before days end for 8th night on the ice cap. Strong winds made setting the tent up quite difficult - but ultimately managed. Total distance now covered 124km, total to finish 403km. Two more days should see us to the radar station 'Dye 2' (now only 56km away) for a much looking forward to rest day - all in good spirits.

28 April 2016 24km's covered today in sunny windy conditions. Elevation now at 1,933m - constantly gaining altitude to the highest point on the ice cap of 2,484m. Only 32km left to the old US cold war early warning radar station which we should be arriving at Saturday mid-morning if all goes to plan. The station has been abandoned since the end of the cold war but the the runway it still operational for training purposes of landing and take-off from the ice. Nice place to relax for the day...

29 April 2016 Closing in on the radar station - only 10km's to go which we'll finish off tomorrow morning and than rest for the remainder of the day. Snow walls built tonight given strong winds from the south- 22km's covered in strong winds.

30 April 2016 Made it to the radar station! Half day skiing - half day resting and exploring the radar station. Quite a few planes landing and taking off from the nearby ice runway- great day to rest and recuperate.

1 May 2016  Late start today after a nice sleep in. 16km covered in the afternoon in coldish overcast conditions but nice to be on the skis again heading directly east now.

2 May 2016 Nice sunny day skiing today - sunglasses most definitely required! With Steph and Paddy doing the navigating today we covered a lot of ground -27km by days end. Snow was a little soft- although is better than what it would be a few days ago given we have climbed to a higher altitude (currently at 2300m).

3 May 2016 Cold day but firm surface allowed a good days skiing (27.6km). Closing in on half-way across the ice cap - we should be getting close to the mid-way point tomorrow. And not far off the highest point.

4 May 2016 Today we covered 28.3km in sunny cold conditions. Currently coldest conditions we have encountered so far - max -15c with a minimum of -30c. We are right in the middle of the ice cap from east to west tonight.

5 May 2016 Over the top. Today we skied over the highest point of the ice cap (2,500km) and so its all downhill skiing from here. We're over halfway now - with 225km to Isortoq. Extended the ropes for the sled's today which took a little time - but still covered good ground of 28.5km. At our current speed - we should be at the Inuit village of Isortoq our finishing point next weekend!

6 May 2016 HUGE NEWS! This morning in the most perfect sunny, windless 'without a cloud in the sky' conditions in the middle of the Greenland ice cap - Paddy has asked Steph to marry him!!!! In a place of endless sparkling snow and ice - Paddy's diamond ring shone brightest of all, second only to the smile on Steph's face! Congratulations!!!!

In less exciting news - we covered distance of 28.5km today in softening 'warm' conditions (warm being around -5c to -10c) - which pleasantly allowed skiing in t-shirts to days end. A perfect end to a perfect day.

7 May 2016 Today we saw a flock of birds heading west to east - they hovered/circled briefly (probably a little surprised to see us)! After offering them some salami and cheese they continued on their way. Nice sunny day today - although looks like a change may be approaching (clouds building up). Covered 28.2km today.

8 May 2016 Snowy conditions meant limited visibility today - but the surface was harder which enabled us to cover some good ground (30km). Only 136km to go - certainly nice to see our goal getting closer and closer. At our current rate - we expect to get to the finish on Friday or Sat night.

9 May 2016 White out today - if you were at a ski resort you'd probably have a day in by the fire. No such luck for us though - on we press. The white out started playing tricks with our eyes - making it difficult to determine up from down and causing some balance issues. But we still managed a solid 25.7km- which means ww are nearly under 100km to go!

10 May 2016 Tough day today - the sled's were buried under this morning and visibility was zero. However - we were lucky - the weather cleared up this afternoon and we had a nice few hours skiing. Soft snow caused some issues by sticking to the skis - wax worked in some cases - some not. Still- we managed to cover 30km in tough conditions.

11 May 2016 Downhill, light sled's and nice warn conditions made for a nice day. Given we are moving into polar bear territory (mostly on the surrounding coasts of the ice sheet)- we tested out our shooting practise this afternoon with the rifle. After building a snowman - Paddy successfully blasted its head off - quite the effort at 75m! Two more days of skiing should see us to the finish!

12 May 2016 And then there was only one day left! Tomorrow we are planning to ski down the ice cap into Isortoq -  our final day of our mammoth 575km journey. We can't wait to see the small village marking the end of our ice cap crossing - but it will also be a little sad saying goodbye to the beautiful ice cap. Our next posting should be from the finishing line of Isortoq- with a beverage or two in celebration!!

13 May 2016 So close! We are 11.3km out from Isortoq but we've run into a slight problem. Due to warm conditions this year- the lakes which surround Isortoq which are normally frozen (and skiable) have melted. This in itself isn't too big a problem but this will mean hiking with all our gear (skis/sleds/etc) into Isortoq. From the Google Earth map - the current location is Camp 24 with the plan to hike next to the lake - then take the little gully heading west - and then hopefully over sea ice into Isortoq all the while keeping a watchful eye out for polar bears.... The adventure​continues!

15 May 2016 We have made it to Isortoq!!! After a tough couple of days hiking /dragging/scrambling across steep rocky mountainous terrain with all our gear on our backs - we finally have made it into Isortoq. After hiking up the side of the lake yesterday we turned into the gully towards the sea hoping to see it was still frozen. Unfortunately it wasn't. This meant our finishing point was now effectively on an island. Thankfully we managed to acquire the services of a local fisherman to cross the water to our finishing point at 3pm local time today. We are very happy and very exhausted. After 26 days on the ice it was so nice to see civilisation and people again - where we can rest our weary legs and eat /drink (lots) of something other than freeze dried food! We'll make this small village our home for the next few days (until Thurs 19th) - and then get a helicopter to another small village called Tasiilaq.  A huge congratulations to Paddy and Steph for such an amazing effort! This has been one of the quickest crossings and it is a testament to their speed, endurance and ability. Celebrations have commenced!!
Google Earth map (requires Google Earth):
To follow their route - download standard version of Google Earth, than click the link below with the .kmz file:
​
Link:
2016 expedition Google earth map